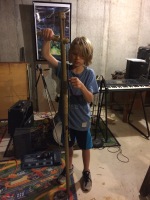 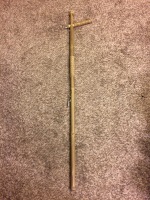 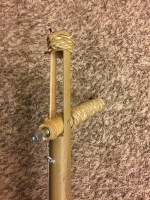 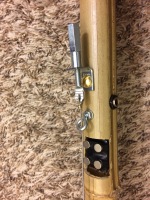 “Bamboom” was how Bennet used to pronounce “bamboo” when he was younger. In Army of Darkness, Ash called his shotgun a “boom stick”—no real correlation, just a fun fact.

This instrument was commissioned by Bennet. I can’t remember what it is really called, but Bennet fell in love after playing one at the St. Louis Cigar Box Guitar Club. Both the frame and handle are constructed entirely of bamboo. The one that he saw included a cigar box and piezo pickup, but I wanted to streamline the design, so I cut a hole and installed a JSC Nd144 electromagnetic pickup. 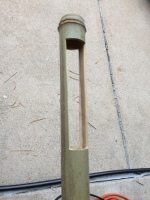 Bamboo is incredibly strong for its thickness and weight, but it is easy to manipulate once a hole is created. I made horizontal cuts with a hacksaw and then drilled a couple of holes, where I wanted to cut vertically, and sawed a half inch strip out of the center. After that, a sharp chisel cut the rest relatively easy, with a surprising amount of control over how much material was removed. 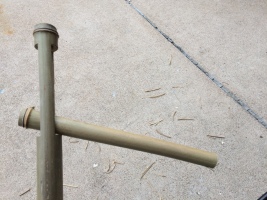 I cut a handle from a smaller diameter piece of bamboo; it fit snug within the opening. Build note: if you are thinking about constructing a similar instrument and use a bamboo handle, consider reinforcing the handle with a piece of dowel rod. The handle on this instrument cracked during its first use. I’ll just remove the twine and then glue and clamp the handle on Bennet’s, but it’s better to reinforce the handle from the start. 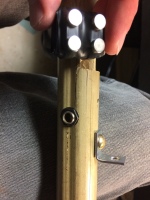 From the pickup hole, I had limited range to place the piece of angle that would hold the tuner and the 1/4″ jack, but that was the only access that I had without creating more holes. It was tight, but it all fit without interfering with the connections. 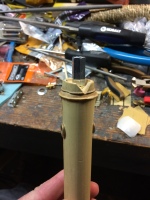 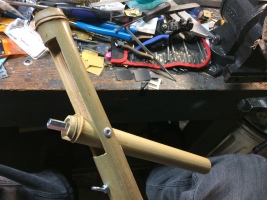 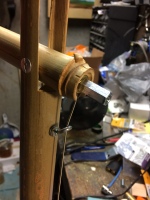 I filed a large rectangular notch into the top of the handle and use a 1/4″ bolt and rod coupling to tighten the string down. A couple of brass pieces and binding screw worked well to allow the handle to pivot. I also rounded out the back of the frame to allow the handle more range and added an eye bolt, bent to an angle, to act as a bridge and set a consistent action. 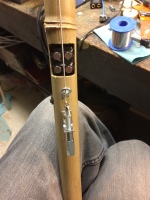 Because of the limited space, I had to set the piece of angle, then install and solder the jack to the pickup, then install the bent eye bolt, and finally seat the pickup. I was extremely happy that it all worked the first time. After that, I added the usual simple machine to set the open note/octave. 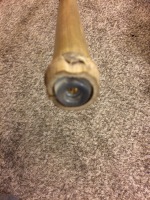 For the bottom, I added a screw-on rubber bumper so that it doesn’t slide on the floor. I fit perfectly, with a little persuasion.

There is only one E string, but the instrument has a lot of range. I added the simple tuner so that the player can set the open note/octave. The player controls the pitch by tightening and slacking the string with the handle and there is definitely a learning curve, as the player has to listen for the note correct pitch—I place the difficulty level somewhere between playing slide guitar and trombone. Good times.